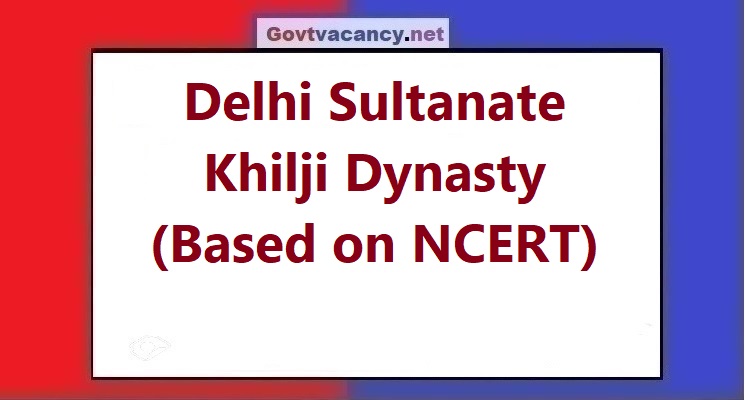 The establishment of power by Khilji is called revolution. However, there is a difference of opinion among historians as to whether Khilji was a Turk or not. The Khilji revolution is also called because this state was not based on ethnic superiority or the approval of the Caliph, but was based on the strength of power. Jalaluddin Khilji founded the Khilji dynasty. Jalaluddin Khilji killed the last Sultan of the Ghulam dynasty and made the Khiljis the Sultan of Delhi. The Khilji dynasty ruled from 1290 to 1320 AD. Alauddin Khilji (1296-1316 AD) was the most famous and capable ruler among the Khilji Sultans of Delhi.

The rulers of this dynasty were as follows:-

The founder of the 'Khilji Dynasty'  in the Delhi Sultanate was Jalaluddin Firoz Khilji (1290-1296 AD).

Shihabuddin Umar Khilji was the son of Alauddin Khilji. At the behest of Malik Kafur, Alauddin appointed his 5-6-year-old son Shihabuddin Umar as his successor instead of making his son Khizr Khan the successor. After the death of Alauddin, Kafur made Shihabuddin the Sultan and secured all the authority in his hands. After enjoying power for about 35 days, Kafur was assassinated by Alauddin's third son Mubarak Khilji. After the murder of Kafur, he himself became the guardian of the Sultan and later he blinded Shihabuddin and imprisoned him.

Qutbuddin Mubarak Khilji  (1316-1320 AD)   was the third son of Sultan Alauddin Khilji of the Khilji dynasty. One of the influential people of Alauddin, Malik Kafur was its patron. After some time Malik Kafur himself started dreaming of becoming Sultan and he hatched a plan to kill Mubarak Khilji. But after escaping from the intrigues of Malik Kafur, Mubarak Khilji ruled successfully for four years. During his reign, peace prevailed in the state.

After this dynasty, the Tughlaq dynasty emerged in the Delhi Sultanate.