The ecosystem comprises of following components:

i. Components having a life which collectively is called biotic components.

ii. Components which are non-living which collectively are called abiotic components.

In an ecosystem, the biotic components can be further classified into the following categories:

i. Producers: It is the group of living organisms that is capable of producing their own food.

iii. Decomposers: These are microscopic organisms that act on dead and decaying matter to decompose them and derive energy in the process.

In an ecosystem, the various biotic components can accordingly be arranged in trophic levels. Each trophic level is arranged according to food levels with producers at the bottom and higher-level consumers as we move up. 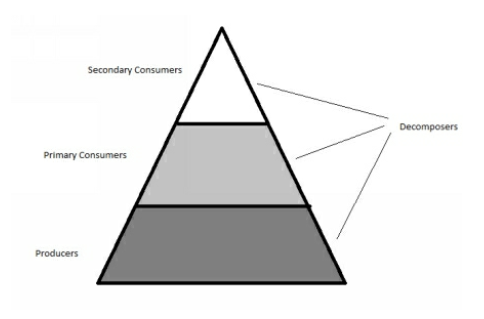 Ecological Pyramids can be of three types:

i. Based on the number of organisms in each trophic level.

ii. Based on the biomass of components of each trophic level.

iii. Based on the energy content of each trophic level.

Pyramids based on numbers or on biomass may or may not be upright (i.e. they can be inverted depending on the nature of the ecosystem to which the pyramid belongs to). However, a pyramid based on energy is always upright. This indicates that while the number and mass of organisms may increase or decrease while moving from the bottom towards the apex in an ecological pyramid, the energy content always reduces from base to apex.

Very often the chemicals like pesticides enter into the food chain via producers. Many of these are neither digested nor excreted and they keep on accumulating in the body of consumers such that their concentration is higher in higher trophic levels as compared to lower trophic levels. This is called biological magnification. Large-scale deaths of vultures feeding on dead cattle occurred as large quantities of diclofenac that was present in cattle were poisonous for vultures.