Introduction to Delhi Sultanate (Based on NCERT) 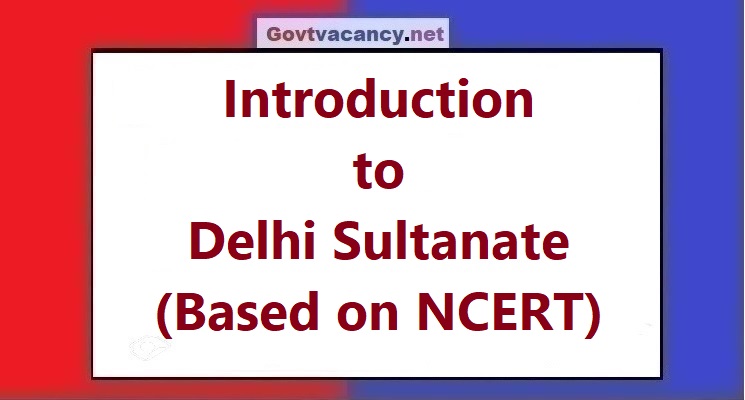 The Turks invaded India in the second half of the eleventh century and the first half of the twelfth century. The first leaders of the Turkish invasion were Muhammad Ghazni and Muhammad Ghori. The success of the first Turkish invasion in the establishment of the Delhi Sultanate has to be considered the most important. If seen, the period of the Delhi Sultanate starts from 1206 AD, but before that, it is necessary to read about Mahmud Ghazni and Muhammad Ghori.

Mahmud Ghaznavi was the son of a Turkic chieftain of the Yemeni dynasty, Subuktagin, the ruler of Ghazni. Mahmud started a campaign against the Hindushahis as soon as he ascended the throne.

Muhammad Ghori was an Afghan warrior, who was the ruler of a kingdom called Gaur under the Ghazni Empire. Muhammad Ghori became the ruler of Gour in 1173 AD. At the time when there were powerful kingdoms of great kings like Prithviraj in the northwest of Mathura division and Jayachandra in the south-east, at that time there was a Muslim chieftain named Shahabuddin Muhammad Ghori (1173 AD-1206 AD) on the west-north frontier of India. He established a new Islamic state by snatching the authority from the descendants of Mahmud Ghaznavi.

After the victory in these wars, Ghori returned to Afghanistan but appointed his slaves (slaves) as the ruler there. Qutbuddin Aibak was one of his most capable slaves, who established an empire on which the foundation of the Delhi Sultanate and the Khilji, Tughlaq, Sayyid, Lodi, Mughal, etc dynasties were laid. Although the rulers of the slave dynasty ruled only from 1206 to 1290, on the foundation of their rule, other foreign Muslims ruled the throne of Delhi, which lasted till the death of Aurangzeb in about AD 1707.