When was the Deccan Rebellion and Deccan Riot Commission appointed? 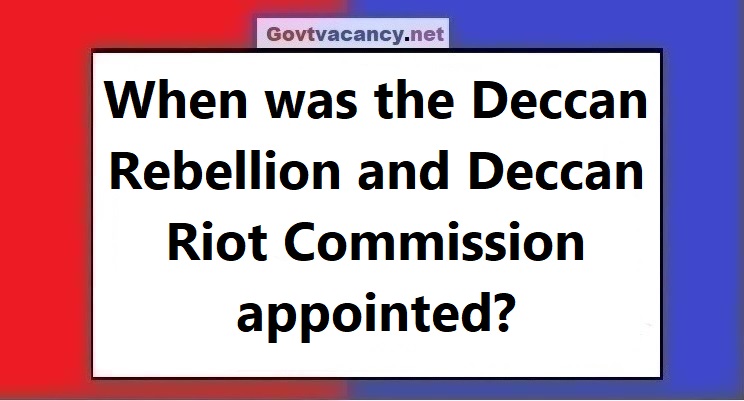 When was the Deccan Rebellion and Deccan Riot Commission appointed?

What were the main causes of the Deccan Rebellion?

There were two main reasons for this –

The farmer was financially broken due to both the above reasons. In December 1874, Kaluram, usury from Kardah village in Shirur taluka, obtained a decree (attachment warrant) for the auction of the house from the court against the farmer (Baba Sahib Deshmukh). On this, the farmers started a movement against the moneylenders and by entering the houses and offices of the moneylenders, the books of account were started burning.

By 1875, this movement spread to other places. Books and accounts were burnt and debt bonds were destroyed. The moneylenders and grain traders started running away from the village overnight.

Who led the Deccan Movement?

Vasudev Balwant Phadke led the Deccan rebellion. In this, he got a lot of support from the educated class of Maharashtra. Justice MG Ranade was one of the prominent names in this.

Consequences of the Deccan Movement

1. The British Government constituted the “Deccan Disruption Commission”. In order to improve the condition of the farmers, the Deccan Farmers Relief Act 1879 was passed in 1876.

2. Increase in self-confidence of farmers.

Why was the Deccan Riots Commission constituted?

The Deccan Riot Commission was constituted in 1876 to improve the condition of the farmers. The purpose of which was to return their lands to the dispossessed agricultural farmers, to help the bankrupt farmers, not to sell the indebted land to any outsider, and to provide financial assistance to the farmers on special occasions such as marriages and festivals.