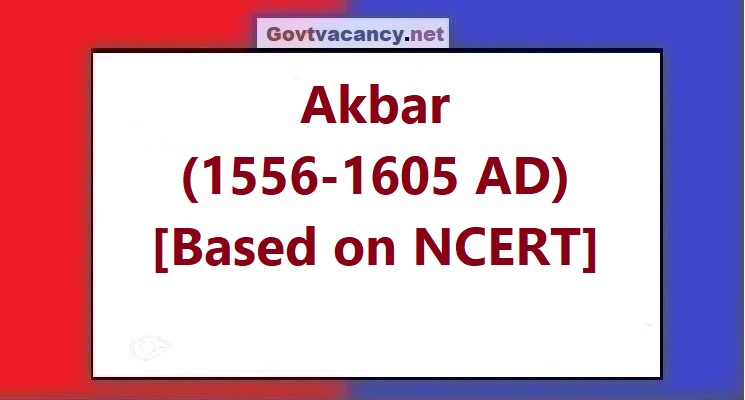 Jalaluddin Muhammad Akbar  was the son of Humayun  and Hamida Banu Begum, the second ruler of the Mughal Empire. Akbar was born on October 15, 1542, in the palace of Raja Virmal of Amarkot, not in the capital of the Mughal Empire. Because in 1540 AD there was a war between  Humayun and Sher Shah Suri in  Bilgram (Kanauj), in which Humayun was defeated and Sher Shah Suri captured Delhi. Then Humayun had to flee from Delhi and took refuge with Raja Virmal of Amarkot and after some time he reached Iran. But after some time, after defeating the descendants of Sher Shah Suri, Humayun again captured the throne of Delhi.

After the death of Humayun, Akbar was coronated at the age of 14 on February 14, 1556, at a place called Kalanaur in Punjab. Due to his short life, Bairam Khan was appointed as the guardian of Akbar. Whom Akbar appointed his vizier and was awarded the title of Khan-i-Khana. From 1556 to 1560, Akbar lived under the protection of Bairam Khan.

On November 5, 1556, the second battle of Panipat took place, in which Akbar's army fought with the commander Hemu. Hemu was the commander of the Afghan ruler Muhammad Adil Shah. Hemu was defeated and killed in this battle.

During the early days of Akbar's rule, from 1560 AD to 1562 AD, he lived with his maternal mother Maham Anga or Mahim Anga, his son Adam Khan and his relatives. Due to this, his relatives had a lot of influence on Akbar's rule. The rule of these two years has been called 'Purda Raj ' or ' Petticoat Sarkar '.

On June 18, 1576 AD, there was a battle of Haldi Ghati between Akbar and Maharana Pratap. In this war, the Mughal army was led by Raja Mansingh. It was a fierce battle between the Mughals and the Rajputs, in which the local Bhil caste people supported the Rajputs. This war was so fierce and destructive that some scholars even compare it with the Mahabharata war. Historians are of the opinion that no one was defeated in this war, but the release of sixes of the huge Mughal army by a handful of Rajputs is equivalent to the victory of Maharana Pratap.

In 1579, Akbar had also announced the Mahjar or Amoghavrutta. The meaning of this Mazhar was ' that if ever the position of any debate arises on any religious matter, then Akbar's decision will be paramount and the same decision will have to be accepted by all. ,

Akbar created a new religion ' Din-i-Ilahi ' in 1582, also known as ' Tohid-i-Ilahi ', which means Divine Monotheism. The 'Din-e-Ilahi' religion included the good principles of many religions mainly Hindu and Muslim religions, Jains, Buddhists, Zoroastrians,  Christians, etc. The head priest of the 'Din-i-Ilahi' religion or sect was made to Abul Fazl, who was one of Akbar's nine gems. At the same time, there are many opinions that Akbar himself was the chief priest of this religion. Raja Birbal was the first Hindu person to join this religion And the last Hindu was also King Birbal. Akbar was highly influenced by the Hindu religion, applying tilak on the forehead and celebrating Hindu festivals, etc. have been taken from the Hindu religion. The purpose of creating this religion was mainly to remove the distance between the Hindu and Muslim religions.

Akbar's court was famous because of the Navaratnas. The Navratnas were actually a group of nine people,  which included Tansen, Raja Birbal, Todarmal, Mulla do Pyaza, Abdurrahim Khan-i-Khana, Abul Fazal, Mansingh, Faizi, and Hakim Humam. Birbal has considered the best in all of these . Birbal's real name was Mahesh. Birbal was given the title of Kavipriya or Kaviraj by Akbar.

Among the Navaratnas, Faizi was the elder brother of Abul Fazal. Abul Fazl was the royal poet of Akbar's court. Abul Fazal has authored famous books namely Akbarnama and Ainne Akbari. In these, the biography of Akbar and his system of governance has been explained. Navratna Tansen was the chief musician of the court. Who was paramount among all musicians. Akbar's contemporary was Sufi saint Sheik Salim Chishti.

Akbar also started the new calendar era ' Ilahi Samvat ' in 1583 AD . which was based on the sun. Akbar built the Buland Darwaza at Fatehpur Sikri in memory of the Gujarat victory. Akbar introduced the use of the official language 'Persian' throughout his empire. Along with this, a uniform monetary system was introduced throughout the empire and the process of uniform weights and measures was also started. Many parameters of land-revenue reform by Akbar were taken from the land-revenue (land-revenue) reforms of Sher Shah Suri (Sher Khan).

Akbar died in 1605 due to diarrheal disease. Akbar was buried near Secunderabad. After that Akbar's son Salim, also known as Jahangir, sat on the Mughal throne.

Historian Lenpool has called Akbar's reign the ' Golden Age of the Mughal Empire'. ,

[1] Sati Pratha - A religious practice prevalent in the Hindu community or it is said that there was a malaise, in which, after the death of a man, his widowed wife, during her husband's last rites, jumped into his burning pyre and committed suicide. had to be done.[2] Slavery - The practice of making soldiers taken captive in war as slaves.[3] Jizya Tax – This tax was levied on people who did not believe in Islam or say that non-Muslim person. [4] Haldi Ghati is a narrow mountain valley located about 40 km north of Udaipur in Rajasthan.