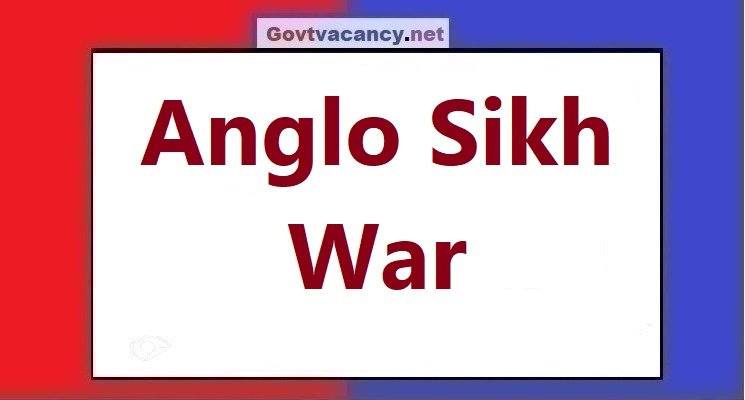 Anglo-Sikh War: The two wars between the British and the Sikhs are referred to as the Anglo-Sikh War. These wars were fought between the years 1845 and 1849. These wars resulted at the end of the Sikh Empire in Punjab and the entire Sikh region came under British rule. Anglo-Sikh war notes for Govt Exam Preparation.

Background of the First Anglo-Sikh War

The British always looked greedily toward the fertile land of Punjab and wanted to dominate Punjab. We can understand this fact from the letters sent to Britain by the British officials living in India –

On the basis of the above facts, it can be said that the British Government wanted to bring Punjab under its control. In the year 1843, Major Broadfoot was appointed as the Agent of the Company at Ludhiana. As soon as he got there, the situation got worse. He declared that all the princely states beyond the Sutlej would not only be under the protection of the Company but would also be confiscated upon the death of Maharaja Dilip Singh.

In the year 1844, as the successor of Lord Ellenborough, Lord Hardinge, who was an eminent soldier, came as Governor-General, he immediately made necessary efforts to strengthen the army. The Sikhs took only one meaning of this preparation for the British they wanted to attack and fight.

Rani Jind Kaur also cooperated at the beginning of the Anglo-Sikh war, because after the death of Raja Ranjit Singh, the power of the Khalsa army had increased a lot and Rani Jind Kaur did not have much control over it, so Jind Kaur's interest was the same. It was believed that if the Khalsa army was defeated, then its power would end and if it was victorious, the eternal region would come under it.

Background of the Second Anglo-Sikh War

Soon after the Treaty of Lahore, the real purpose of the British came to the fore. Lal Singh was convicted in an investigation and exiled outside the state and the rule of Lahore was handed over to a delegation. According to the Treaty of Lahore, the English army was to leave Lahore by the end of 1846, but Lord Hardinge wanted to keep the army there for some time. So there was another treaty, the treaty of Bhairowal –

When Rani Jind Kaur started raising her voice against this, the Governor-General made a declaration on August 20, 1847, according to which, in the interest of Dilip Singh's education, Maharani Jind Kaur was separated from him. And Sheikhpura was exiled by giving 48000/- annual pension.

Now a council of 8 Sikh Sardars was formed, who would look after the governance with Maharaja Dilip Singh, but that council would be presided over by the English Resident.

After this, in the year 1848, the imperialist Lord Dalhousie took the post of Governor-General. He believed that we should not lose any opportunity to get new territories. Dalhousie got this opportunity from the rebellion of Mulraj, the governor of Multan province of Punjab.