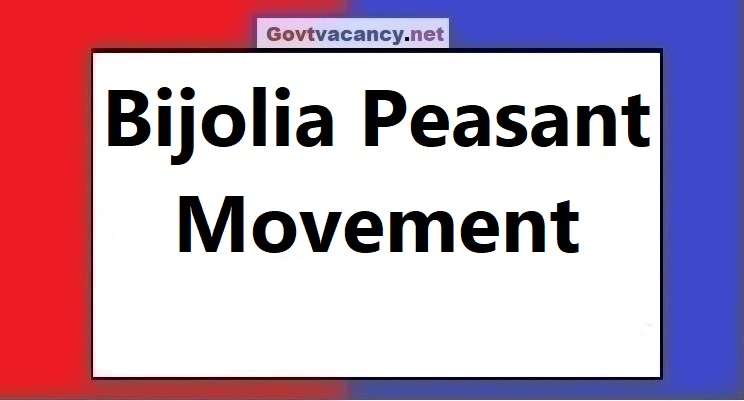 Originally, most of the farmers here belonged to the Dhakad caste. 84 different types of oppressive taxes (Lag, Bagh, Begar, Lata, Kunta, Chavari, Talwar Bandai) were imposed by the Thikanedar on the farmers. In 1894, Rao Krishna Singh became the new Thikanedar. The farmers affected by these taxes were expected to get relief in taxes from the new Tikanedar, but till 1897, no reduction in taxes was done. Therefore, the foundation of this movement was laid in the same year 1897.

In the year 1897, after convening a panchayat in Girdharpur, a village, in the same manner, it was decided under the chairmanship of Sadhu Sitaramdas that the present Thikanedar Raokrishna Singh would complain to the Maharana of Mewar. Thakri Patel and Nanji Patel were appointed for this work. On this complaint, Mewar Maharana appointed his inquiry officer Hamidhusain, but after investigation, no action was taken.

After the investigation, no action was taken, because of the lack of action, Raokrishna Singh, the hideout of the Bijolia hideout, became more emboldened and he, in retaliation, expelled the complainants Thakri Patel and Nanji Patel from Mewar. Along with this, in the year 1903, a new tax named Chanwari was introduced, under which there was a provision of cash tax of Rs.5 for the marriage of the girl.

After Raokrishna Singh died childless in the year 1906, Raoprithvi Singh succeeded him. As soon as he became a Thikanedar, he tied the sword and imposed the succession tax. Which was strongly opposed by the farmers.

In the year 1916, at the request of Sadhu Sitaram Das, Vijay Singh Pathik joined this movement and took over the leadership of this movement. His original name was Bhupsingh and he was a resident of Bulandshahr (U.P.). In 1917, the Upramal Panch Board (13 members) was formed by him on the day of Sawan-Amavasya. Manna Petal was appointed on the post of Sarpanch of this Panchaboard.

In 1918, Vijay Singh met Gandhiji in Bombay and made him aware of this movement. Gandhiji was very impressed by them and gave him the title of National Traveler. Gandhiji sent his General Secretary Mahadev Desai to investigate this movement.

Here in 1919, a letter named Rajasthan Kesari was brought out from Wardha Maharashtra by Vijay Singh, and in the same year, Rajasthan Sevak Sangh was also established by him. Later on, through the newspaper published in Kanpur, the Bijolia farmer movement was spread all over India.

Due to Gandhi's interest in this movement, the British Government constituted another commission of inquiry in the year 1918-19 under the chairmanship of Bindulala Bhattacharya. After an investigation by this commission, some reduction in taxes was done.

On 10 September 1923, Vijay Singh Pathik was arrested for his association with another peasant movement named Bengu.

In 1927, Manikya Lal Verma took over the leadership of the Bijolia farmer movement. In this, Haribhau Upadhyay and Jamnalal Bajaj supported him. In 1941, there was an agreement between Manikya Lal Verma and the Prime Minister of Mewar, Sir T. Vijay Raghavacharya, under which all the demands of the farmers were accepted and the 44-year-long movement came to an end.

The Bijolia movement was different from other peasant movements due to its non-violent nature. Manikya Lal Varma's song “Panchhida” which enthused the farmers has some key points. Women also actively participated in this movement, among which Anjana Devi Choudhary, Narayan Devi Verma, and Rama Devi were prominent. Finally, with the victory of the farmers, this peasant movement of India, which lasted for 44 years, came to an end.

Frequently asked questions and their answers from Bijolia Kisan Andolan –

Question: When did the Bijolia farmer movement take place?

Question:- What were the main reasons for the Bijolia peasant movement?

Answer:- The main reasons for the Bijolia peasant movement were 84 types of oppressive taxes imposed on the farmers such as Lag, Bagh, Begar, Lata, Kunta, Chavari, Talwar Bandhai, etc. Under whose burden the condition of the farmers was getting worse day by day.

Question: What was the result of the Bijolia farmer movement?