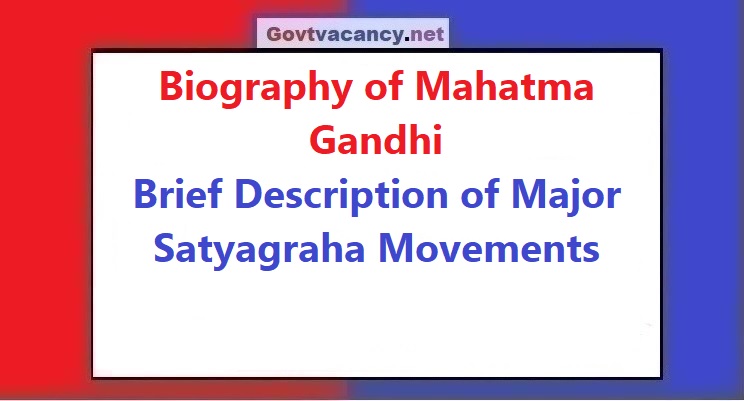 Gandhi was born on 2 October 1869 in Porbandar, a coastal city in Gujarat. His father Karamchand Gandhi was the Diwan of a small princely state of Kathiawar during the British Raj. Mohandas's mother was Putlibai, she was of a highly religious nature, which influenced young Mohandas and these values ​​later played an important role in his life.

He had his middle school education in Porbandar and high school in Rajkot. In 1887, he passed the matriculation examination from Ahmedabad. After this, Mohandas joined Shamaldas College in Bhavnagar, but due to ill health and home disconnection, he left the college and went back to Porbandar. In the year 1888, Mohandas went to England to study law at University College London and became a barrister. Gandhi returned to India in June 1891 and learned of his mother's death. He started advocacy in Bombay but did not get much success. After this, he went to Rajkot where he started writing cases for the needy, but after some time he had to leave this work too. Finally, in 1893, he accepted the work of advocacy from an Indian firm in South Africa on a one-year contract.

Gandhi reached South Africa at the age of 24. He spent 21 years of his life in South Africa where his political thought and leadership skills developed. He faced severe racial discrimination in South Africa. In view of the injustice being done to Indians in South Africa, questions related to the respect of Indians and their own identity under the British Empire began to arise in their mind. He also raised the issue of the citizenship of Indians with the South African government and actively motivated British officials to recruit Indians in the Zulu War of 1906. According to Gandhi, Indians should cooperate in the British war effort in order to legalize their citizenship claims.

Gandhi returned to India from South Africa in the year 1914. By this time, Gandhi had become a nationalist leader and organizer. He came to India at the behest of liberal Congress leader Gopal Krishna Gokhale and in the early stages, Gandhi's ideas were largely influenced by Gokhale's ideas. Initially, Gandhi visited different parts of the country and tried to understand political, economic, and social issues. After coming to India, Gandhiji also did some movements which are as follows –

On April 15, 1917, Mohandas Karamchand Gandhi reached Champaran, Motihari with Rajkumar Shukla. He was ordained at the house of Babu Gorakh Prasad. Champaran, located in the northwest of Bihar, is the area where the foundation of Satyagraha was laid. In 1917, the movements in Champaran, Bihar, gave Gandhi the first political success in India. British zamindars in Champaran used to force farmers to cultivate indigo instead of food crops and buy crops at cheap prices, which worsened the condition of the farmers. Due to this, he was surrounded by extreme poverty. After a devastating famine, the British government imposed repressive taxes, the burden of which increased day by day. Overall the situation was very disappointing. Gandhiji led protests and strikes against the landlords, after which the demands of the poor and farmers were accepted.

Kheda Satyagraha was a satyagraha (movement) of farmers in the Kheda district of Gujarat against the British government's tax collection. In 1918, Kheda in Gujarat was hit by floods and drought, due to which the condition of farmers and the poor became worse and people started demanding tax waivers. In Kheda, under the guidance of Gandhiji, Sardar Patel led the farmers to discuss this problem with the British. After this, the British released all the prisoners by giving them freedom from revenue collection. Thus after Champaran and Kheda, Gandhi's fame spread across the country and he emerged as an important leader of the freedom movement.

The Khilafat Movement (1919–1924) was a politico-religious movement mainly led by Muslims in India. The purpose of this movement was to put pressure on the British to restore the post of Caliph in Turkey.

When the Simon Commission came to India in 1928, it was boycotted nationwide. Due to this boycott, the people of India had an indomitable enthusiasm for independence. When the commission was still in India, the Satyagraha of Bardoli had also started. Bardoli is located in the Gujarat district. The main reason for the Satyagraha in Bardoli was that the annual rent which the farmers were paying there suddenly increased by 30% and the increased rent was to be implemented from 30 June 1927. It was natural for the farmers to be angry about this increased rent. The Legislative Assembly of Mumbai State also opposed this increase in rent. A circle of farmers went to meet the higher officials but to no avail. This rent was also opposed by many public meetings, but the Mumbai government did not budge. Then it was decided to launch a Satyagraha movement in protest against this rent being compelled. A huge meeting of farmers was organized at Bardoli, In which it was unanimously decided that the increased rent would not be given at any cost. Non-cooperation would be done with the government employees who would come to collect the rent because during that time the arrangements for food and transportation for the government employees were made by the farmers. The responsibility of this movement was entrusted to Shri Vallabhbhai Patel. Which he accepted on the advice of Gandhiji. When the government employees did not get the rent in Bardoli, they started taking away the animals of the farmers. The movable and immovable property of the farmers also started being attached. In protest against this atrocity, Vitthalbhai Patel, who was the elder brother of Vallabhbhai Patel, warned the government that, if this atrocity was not stopped, he would resign from the post of the President of the Central Assembly.

Swaraj and the Salt Satyagraha (1930)

In 1934, Gandhi resigned from the membership of the Congress. Instead of political activities, he focused on building the nation 'from the lowest level' through 'constructive programs'. He started the work of educating rural India, continuing the movement against untouchability, promoting spinning, weaving, and other cottage industries, and creating an education system suited to the needs of the people.

As a result of the efforts of Dalit leader BR Ambedkar, the British government had allowed separate electorates for the untouchables under a new constitution. Gandhiji, who was lodged in Yerwada Jail, observed a six-day fast in September 1932 in protest against this and forced the government to adopt a similar system (Poona Pact). This was the beginning of the campaign launched by Gandhiji to improve the lives of the untouchables. On 8 May 1933, Gandhi observed a 21-day fast for self-purification and began a one-year campaign to further the Harijan movement. Dalit leaders like Ambedkar were not pleased with this movement and condemned Gandhi's use of the word Harijan for Dalits.

At the beginning of the Second World War, Gandhi was in favor of giving 'non-violent moral support' to the British, but many Congress leaders were unhappy that the government had thrown the country into war without consulting the representatives of the people. Gandhi declared that on the one hand India was being denied independence and on the other, India was being drawn into the war for the victory of democratic forces. As the war progressed, Gandhiji and the Congress intensified the demand for the "Quit India" movement. 'Quit India' became the most powerful movement in the struggle for independence, with widespread violence and arrests. Thousands of freedom fighters were either killed or injured in this struggle and thousands were also arrested. Gandhi had made it clear that he would not support the British war effort until India was given immediate independence. He had also said that this movement would not stop despite personal violence. He believed that the government anarchy prevailing in the country is more dangerous than the real anarchy. Gandhiji asked all Congressmen and Indians to maintain discipline with do or die with non-violence.

As everyone anticipated, the British government arrested Gandhi and all the members of the Congress Working Committee in Mumbai on 9 August 1942, and Gandhi was taken to the Aanga Khan Palace in Pune where he was imprisoned for two years. Meanwhile, his wife Kasturba Gandhi died on 22 February 1944 and after some time Gandhiji also suffered from malaria. The British could not leave him in jail in this condition, so he was released on 6 May 1944 for necessary treatment. Despite the partial success, the Quit India movement organized India and by the end of World War II, the British government had given a clear indication that power would soon be handed over to the Indians. Gandhiji ended the Quit India Movement and the government released about 1 lakh, political prisoners.

On 30 January 1948, the Father of the Nation Mahatma Gandhi was assassinated at 5:17 pm at Birla House in Delhi. Gandhi was on his way to address a prayer meeting when his assassin Nathuram Godse fired three bullets into his chest. It is believed that 'Hey Ram' was the last word that came out of his mouth. Nathuram Godse and his associate were tried and sentenced to death in 1949.