Delhi Sultanate – Mamluk or Slave Dynasty (Based on NCERT) 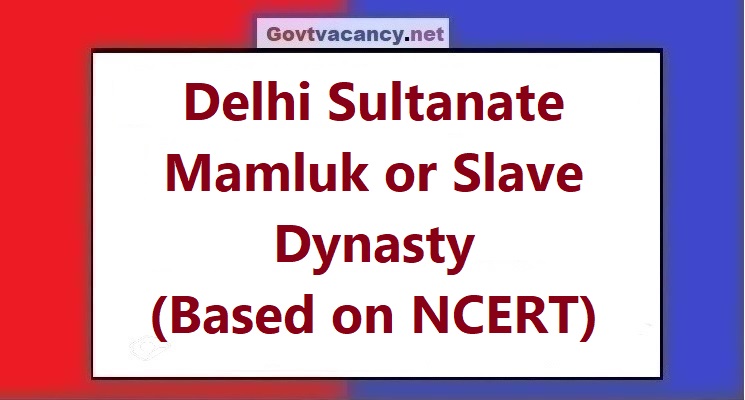 Qutbuddin Aibak was a slave of Muhammad Ghori. The dynasty he established in India is called the Slave Dynasty. This dynasty ruled for 84 years from 1206 to 1290 AD. The rulers or founders of this dynasty were slaves (slaves) and not kings. That is why it is called a dynasty instead of a dynasty.

The rulers of this dynasty were as follows:-

Ascension -  After the death of Muhammad Ghori,  on June 25, 1206, the unofficial accession of Qutubuddin Aibak took place in Lahore. He made Lahore his capital.

Son – Aramshah (Many historians do not consider it the son of Qutubuddin Aibak).

Death – In November 1210 AD, he died due to falling from a horse while playing Chogan (Polo) in Lahore.

After the sudden death of Qutbuddin Aibak, the Turkish nobles made his son Aramshah the Sultan of Lahore in 1210 AD. Meanwhile, Aramshah could not control the invasion of Qubacha and Khiljis. As a result, the Turkish nobles wanted to make the governor of Budaun, Iltutmish, who was the son-in-law of Qutbuddin Aibak, the Sultan, which was opposed by Aramshah. Iltutmish captured power by killing Aramshah.

Iltutmish belonged to the Ilbari tribe of Turkistan. Its original name was 'Altamash'. Impressed by the efficiency of Iltutmish against the Khokhars, Muhammad Ghori gave him an important post named 'Amirul Umra'. It ruled from 1210 AD to 1236 AD. Many Turkic nobles were opposing him from the time of his coronation.

After attaining the rank of Sultan, Iltutmish had to face some difficulties. Under this, Iltutmish first suppressed the rebellion of 'Kulbi' i.e. chieftain during the time of Qutubuddin Aibak, and 'Muizzi' i.e. the chieftains of the time of Muhammad Ghori. Iltumish, not trusting these rebel chiefs, formed a group or organization of his 40 slave chieftains, which was named 'Turkan-i-Chihalgani'. This organization is also known as 'Charagan'.

Ascension - Aibak, with the permission of the commander Amid Ali Ismail, killed Aramshah and established the Ilbari dynasty in place of the Aibak dynasty in Delhi in 1210 AD.

Rukunuddin Firoz Shah was the ruler of the Ghulam dynasty in the Delhi Sultanate. After the death of Iltutmish in 1236, he remained in power for less than a year. He was the youngest son of Iltutmish.

Razia al-Din, the royal name "Jalolat ud-Din Raziyo", commonly known as "Razia Sultan" or "Razia Sultana", was a sultan of the Delhi Sultanate. She was the daughter of Iltutmish. Razia Sultana was the first female ruler in Muslim and Turkish history.

Ascension - With the support of the public, the coronation was done in November 1236 AD.

After killing Razia Sultan in 1240 AD, his brother Muizuddin Bahramshah (1240 AD) took control of the Sultanate. It was made the post of Naib-e-Mumlaqat (patron) by the Turkish nobles. He was a nominal ruler, in fact, only Chalisa was ruling. The Turk nobles killed Bahram Shah in 1242 AD.

Alauddin Masud Shah was a Turkish ruler who became the seventh sultan of the Delhi Sultanate. He was also from the slave dynasty. He  was the grandson of Rukunuddin Firoz  Shah and the son of Muizuddin Bahram Shah . During his time the post of Naib went to Malik Qutbuddin Hasan, the leader of the group of non-Turkish warlords. The real authority to rule was with Vazir Muhajuddin, who was Tajik (non-Turk) by caste. Najumuddin Abu Bakr got this post as a result of the opposition of the Turkish chiefs. It was during this time that Balban got the title of Hansi. 'Rich Hajib'The post of Iltutmish was received by Ghiyasuddin Balban, a member of the 'Forty Turks' group. In 1245, the Mongols captured Uchch, but Balban drove the Mongols from Uchchh, this increased the prestige of Balban. Remaining in the position of Amir Hajib, Balban took the real authority of governance into his hands. Ultimately, Balban, along with  Nasiruddin Mahmud and his mother, conspired to remove Alauddin Masood from the throne. He succeeded in this in June 1246. Balban replaced Iltutmish's great-grandson Nasiruddin Mahmud as Sultan in place of Alauddin Masood.

Nasiruddin Mahmud was a Turkish ruler who became the eighth sultan of the Delhi Sultanate. He was also from the slave dynasty. Balban, by conspiracy, removed Sultan Masood Shah and made Nasiruddin Mahmud the Sultan in 1246 AD. Balban got his daughter married to Nasiruddin Mahmud. Nasiruddin was a man of sweet and religious nature. As a ruler, Nasiruddin lacked the necessary qualities to face the then complex situation. Nasiruddin died on 12 February 1266 AD. After that, he did not have any male heirs left. Thus ended the dynasty of Iltutmish. Then Balban, whose merit had been proved and who was nominated as his successor by the late Sultan, is said to have ascended the throne with the tacit approval of the chieftains and office-bearers.

Ghiyasuddin Balban  His real name was Bahauddin. He ruled from 1266 to 1286. Ghiyasuddin Balban was an Ilbari Turk by caste. In his childhood, the Mongols caught him and sold him as a slave in the market of Baghdad. Khwaja Jamaluddin along with his other slaves brought him to Delhi in 1232 AD. All these were bought by Sultan Iltutmish. Thus Balban belonged to the famous group of Turkish slaves called Chehlagan of Iltutmish.

Before his death, Balban had appointed Kaikhusro, the son of his eldest son, as his successor. But after the death of Balban, the Kotwal of Delhi, Fakhruddin Muhammad, through diplomacy, gave Kaikhusaro the subedari of Multan and placed Kaiqubad on the throne of Delhi. Kaiqubad or 'Kaikobad' (1286-1290 AD) was placed on the throne of Delhi at the age of 17-18 years. Kaiqubad made the non-Turk chieftain Jalaluddin Khilji his commander, which had a bad effect on the Turk chieftains. The Turk chieftains were thinking of taking revenge that Kaiqubad was paralyzed. Due to paralysis, Kaiqubad became incapable of administration.

Shamshuddin Qirsh was the last ruler of the slave dynasty in India. Due to the paralysis of Kaiqubad, he was completely incapable of the work of administration. Seeing him incompetent in the works of administration, the Ottoman chiefs declared his three-year-old son  Shamsuddin Qamarsh as Sultan. Later,  Jalaluddin Firoz Khilji killed Shamsuddin after seeing an appropriate opportunity. After the murder of Shamsuddin, Jalaluddin Firoz Khilji himself took control of the throne of Delhi. In this way, the Khilji dynasty was later established on the throne of Delhi .