Consider the following five disk access requests of the form (request id, cylinder number) that are present in the disk scheduler queue at a given time.
(P, 155), (Q, 85), (R, 110), (S, 30), (T, 115)
Assume the head is positioned at cylinder 100. The scheduler follows Shortest Seek Time First scheduling to service the requests.
Which one of the following statements is FALSE?

In the Shortest Seek Time First (SSTF) disk scheduling algorithm, the I/O request which requires the least disk arm movement, irrespective of the direction, from the current position is selected.

Given the disk head is currently at cylinder number 100. Using SSTF it would next serve the request id R with cylinder number 110, because it requires least amount of arm movement. After R being served, T would be served and so on, as shown below: 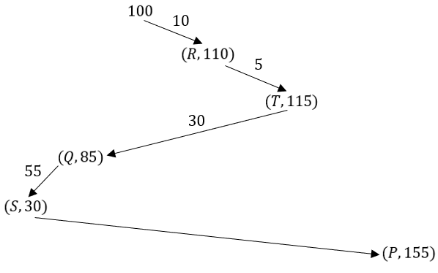