Maurya Empire (Based on NCERT) 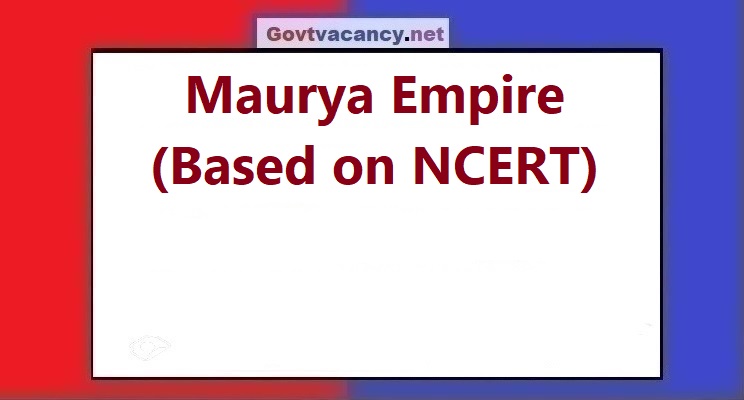 Maurya Empire: Chandragupta Maurya laid the foundation of the Maurya dynasty. Chandragupta Maurya conquered the Magadha kingdom in 322-321 BC  with the help of his guru Chanakya, also known as Kautilya and real name Vishnugupta. Where King Ghanananda ( Nandraj  ) of the Nanda dynasty ruled. Simultaneously with the decline of the Nanda dynasty in Magadha and the emergence of the vast Maurya Empire, which lasted from 323 BC to 184 BC. It made its capital at Pataliputra which is presently known as Patna (Bihar).

Chandragupta Maurya laid the foundation of the Maurya dynasty and established the vast Maurya Empire. Chandragupta's empire extended from Kashmir in the north to Karnataka in the south and from Bengal in the east to Persia (present-day Iran) in the north. Chanakya got the post of Prime Minister during the rule of Chandragupta. Chanakya had also composed a book called ' Arthashastra ', in which administrative rules have been mentioned.

Chandragupta defeated the Greek ruler Seleucus (Alexander's general) in battle in 305 BC  and as a treaty, Chandragupta was married to the daughter of Seleucus. It was Seleucus who sent Megasthenes as his ambassador to the court of Chandragupta, who wrote a book called ' Indica ', in which the grandeur and governance system of the Maurya Empire has been described live.

Chandragupta Maurya was a follower of Jainism, he had received his education in Jainism from the Jain monk Bhadrabahu. According to a legend, it is also said that after suffering a 12-year-long famine in the state, Chandragupta renounced the kingdom and went to Shravanabelagola (Mysore) with Jain sage Bhadrabahu and became involved in penance, and there in 298 BC the body Abandoned.

According to the Buddhist text Divyavadana, there was a rebellion in Taxila under Bindusara's rule, where Bindusara's son Sushibha ruled, who failed to stop this rebellion, due to which Bindusara sent his second son Ashoka there, who completely suppressed the rebellion that had flourished there. gave.

After the death of Bindusara, his son Ashoka became the ruler of the Maurya Empire, which left a distinctive mark in world history. There is also a legend that Ashoka conquered the Maurya throne by killing 99 of his brothers. In Buddhist texts, Ashoka is considered to be an angry and violent emperor. But Emperor Ashoka is also known as a king who renounced violence and anger and adopted the path of non-violence and set an example of universal brotherhood by following the path of love and peace.

In Sinhalese-Buddhist texts, Ashoka has been called Priyadarshan and Priyadarshi in Deepvansh. In the texts and inscriptions, it is called Devanampiyadashi.

Ashoka invaded Kalinga in the ninth year of his coronation and established his suzerainty over it. In this war, more than one lakh soldiers were killed and many lakhs were injured and taken prisoner, this war was so horrific that after seeing its massacre, Ashoka had a change of heart and he left violence and started on the path of non-violence. Thus the battle of Kalinga proved to be the last battle of Ashoka's life.

It is believed that after being hurt by the Kalinga war, Emperor Ashoka changed the policy of expansion of his kingdom and renounced war and violence, adopted Buddhism, and became a Buddhist by following the path of non-violence and love and promoted Buddhism widely in the country and abroad. - spread. For the propagation of Buddhism, Ashoka also sent his son and daughter to many countries. But there are many opinions that Ashoka followed Buddhism but never became a Buddhist himself.

After the Kalinga war, Ashoka started Dhamma. Of. If seen, the rules and teachings of Ashoka's Dhamma and Buddhism seem to be identical. In both, people have been inspired not to kill and violence, to live with love with everyone, to respect the younger and the elders, to follow charity and kindness, etc.

Emperor Ashoka had built 84 stupas, which took 3 years to build. But according to Buddhist legends, Ashoka had built 4000 stupas. Emperor Ashoka had also built many pillars, inscriptions, etc. One of them is the  Ashoka Pillar at Sarnath, which has been adopted as our national emblem. On the top of which there are four lions who are facing each other and one of them is written below the lion ' Satyamev Jayate ' which is depicted in the national emblem. It is an exemplary example of Mauryan architecture.

According to Chinese traveler Hiuen Tsang, Srinagar was built by Emperor Ashoka.

Emperor Ashoka's oath to never fight and to spend all his wealth on the promotion of Buddhism became the reason for the decline of the Maurya Empire somewhere. Due to not fighting and following the path of non-violence, the military force became weak, due to which the power of the Maurya Empire went on decreasing. At the same time, it is also true that after the great emperor Ashoka, none of his successors was capable and powerful enough to handle the Maurya Empire. As a result, within fifty years of Ashoka's death, his vast empire disintegrated.