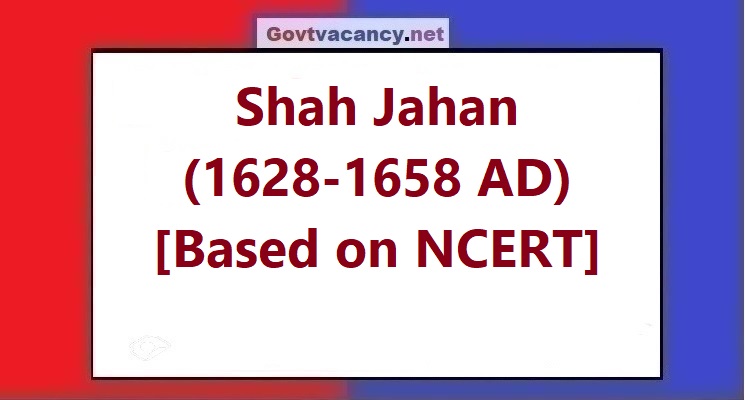 Shah Jahan was the son of Jahangir and the grandson of Akbar, he was born on 5 January 1592 in Lahore. His childhood name was Khurram. There was a treaty between Ahmednagar and the Mughal Empire in 1617 AD, in which Jahangir's son Khurram played an important role, pleased with which Jahangir awarded Khurram the title of Shah Jahan.

After the death of Jahangir on February 24, 1682, Shah Jahan became the new emperor of the Mughal Empire. After becoming the Mughal ruler, the first three years were spent suppressing the rebellion of Jujhar Singh and Afghan Sardar  Khanejahan Lodi of Bundela. Shah Jahan also had a fight with Hargobind, the sixth Guru of the Sikhs, in which the Sikh army was defeated.

Shah Jahan was married in 1612 AD to Arjumand Banu Begum, daughter of Asaf Khan, who was the niece of Nur Jahan, wife of Jahangir. Arjumand Banu Begum was later known as Mumtaz Mahal. Shah Jahan and Mumtaz Mahal had four sons and three daughters. The names of the sons were Aurangzeb, Muradbakhsh, Darashikoh, and Shuja. After the death of Mumtaz in 1631 AD, Shah Jahan laid the foundation of the Taj Mahal in memory of Mumtaz on the banks of the Yamuna river in Agra, which was built in 1653 AD. It was completed. Mumtaz was buried in the Taj Mahal itself.

In 1633 AD, Shah Jahan invaded Ahmednagar in South India and made it a part of the Mughal Empire. A few years later, in 1636 AD, Golconda was attacked, where the then Sultan was Abdul shah. Abdul shah faced defeat and accepted the suzerainty of the Mughals. During this time, Mir Jumla, the vizier of Abdulshah, had given the priceless Kohinoor Hira as a gift to Shah Jahan. In the same year, Shah Jahan attacked Bijapur and forced the then ruler Muhammad Adil Shah to make a treaty.

1639 AD In AD Shah Jahan laid the foundation of a new capital called  Shahjahannamabad near  Delhi. In 1645 AD, Shah Jahan sent his son Murad Baksh to establish his empire over Central Asia, but he could not succeed in this. That is why in 1647 AD, he sent his second son  Aurangzeb to complete this work, but he too could not succeed.

The reign of Shah Jahan has been called the Golden Age in architectural and cultural terms. Shah Jahan built many famous buildings during his reign. These include the Taj Mahal in Agra, the Red Fort and Jama Masjid in Delhi, the Moti Masjid in Agra, the Deewane Khas, Deewane Aam, and Musamman Burj located in the Agra Fort,  the Shalimar Bagh in Lahore, the Sheeshmahal located in the village of Shalamar, and Kabul, Kandahar, Kashmir and AjmerIn the beginning, many palaces, gardens, etc., many buildings were built. Shah Jahan also got the Ravi Canal constructed in Lahore.

In the court of Shah Jahan, there used to be Pandit Jagannath Rajkavi, who was also known as Jagannath Panditraj. Who is the creator of ' Ganga Lahiri ' and ' Ras Gangadhar '. He was a poet, critic, and litterateur of a high order. In his court, the musicians Sursen, Sukhsen, etc. were courtiers. Shah Jahan's eldest son  Darashikoh got the ' Bhagavad Gita ' and ' Yogavasistha ' translated into the Persian language, as well as compiled the Vedas. That is why Shah Jahan honored Darashikoh with the title of ' Shahbuland Iqbal '.

In 1657 AD, as soon as Shah Jahan became ill, his sons started competing to become the Sultan and mutual struggle started. The event is known in history as the ' War of Succession '. Shah Jahan wanted to make Darashikoh the ruler of the Mughal Empire after him, but Aurangzeb himself wanted to become the ruler of the Mughals. Due to this the battle to become Sultan started between all the seven children of Shah Jahan. There were some major wars between them like the war of Dharamat (in 1658 AD), the war of Samugarh, and the war of Devrai.

Aurangzeb was victorious and he became the ruler of the Mughal Empire. Aurangzeb did not stop in this only, he defeated Murad Baksh and got him killed. Simultaneously, his father Shah Jahan was imprisoned and locked in the fort of Agra, Shahburj. Where Shah Jahan spent eight years as a prisoner and died in 1666 AD. Shah Jahan's body was buried in the Taj Mahal near the tomb of his wife Mumtaz Mahal. Shah Jahan was the only Mughal ruler who was taken prisoner by his son.