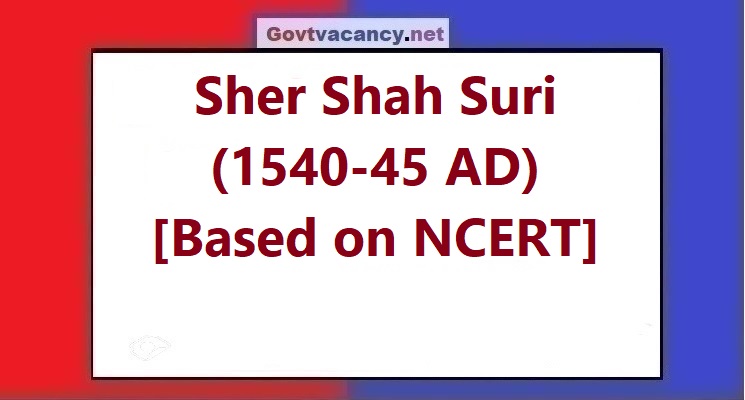 Sher Shah Suri assumed the title of ' Hazrat Ali ' after defeating Nusrat Shah, the ruler of Bengal in 1529 AD. Captured the fort of Chunar in 1530 AD and married Ladmalika, the widow of Taj Khan. He also got a lot of wealth from the fort.

In 1539 AD, between Humayun and Sher Shah Suri, the ruler of the Mughal Empire, there was a battle of Chausa in which Humayun had to be defeated, due to which Humayun suffered a lot, while on the other hand Sher Khan assumed the title of  Al-Sultan-Adil or  Sher Shah and took his name. Issued coins and also got Khutba  (speech of praise) recited.

In 1540 AD, there was a war between Humayun and Sher Shah in Bilgram (Kanauj), in which Humayun had to face defeat, and Delhi was again established by the Afghans. After capturing Delhi, Sher Shah established the second Afghan empire or the  Sur dynasty.

Sher Shah Suri attacked Malwa in 1542 AD and subdued it. In 1543 AD, after attacking Raisin, treacherously killed the Rajput ruler there. This invasion forced the Rajput women to show their Jauhar. This incident is remembered as a blot on the character of Sher Shah Suri.

After this Sher Shah Suri attacked Marwar in 1544 AD, at that time the king was Maldev. In this battle, Rajput Gayata and Kuppa made Sher Shah Suri's Afghan army sweat-free. This incident greatly affected Sher Shah Suri.

Shortly after this war, Sher Shah Suri attacked the fort of Kalinjar which was then in the possession of Raja Kirat Singh. At the same time, a cannon named ' Ukka ' was being fired when a shell came and fell on the pile of gunpowder lying nearby and Sher Shah Suri died due to the explosion. Sher Shah is buried in Sasaram, Bihar where Sher Shah's tomb was built, this tomb is a masterpiece of medieval art.

After the death of Sher Shah Suri, Delhi was ruled by the rulers of the Sur dynasty till about 1555 AD. Humayun defeated  Sikandar Shah Suri [2]  in the battle of   Machhiwara on 15 May and  Sirhind on 22 June 1555  and once again took control of Delhi and extended the Mughal Empire. But Humayun could not rule for long, after that Akbar took over the Mughal Empire and laid the foundation of a great empire.

Sher Shah Suri is famous for his efficient administration in Indian history. He created a good system for land revenue reform and made many important changes. Todar Mal had made a special contribution to Sher Shah's land revenue reform. Sher Shah Suri got the land measured again and did not allow zamindars and middlemen in the management of revenue. At the same time, to give ownership rights to the farmers, pattas were distributed, which were called ' Ikararnama ' or ' Kubliyat '. These land revenue reforms were so excellent that the next Mughal emperor Akbar also used them in his rule.

Sher Shah Suri also got many cantonments and inns built for the soldiers. Along with this, roads were also constructed for traffic, of which 4 roads are famous. The Grand Trunk Road [4] (GT Road) which runs from Calcutta to Peshawar was renovated and was then called Sadak-e-Azam [5]. Along with this, the second road was built from Agra to Chittor, the third road from Agra to Burhanpur, and the fourth road from Multan to Lahore. Sher Shah Suri built a city named Rohtasgarh to secure the northern border of his kingdom. The fort was also built.

1. Sher Shah Suri – Also known as Sher Khan.2.  Sikandar Shah Suri  was a descendant of Sher Khan (Sher Shah Suri).3. Jizya – Tax levied on non-Muslim people, under Islamic law.4.  Grand Trunk Road - This road existed even in the Maurya Empire, at that time this road was called 'Uttar Path'.5. Sadak-e-Azam – The literary meaning of this word is- 'the main road'.