The arrival of European companies in India - Modern History of India 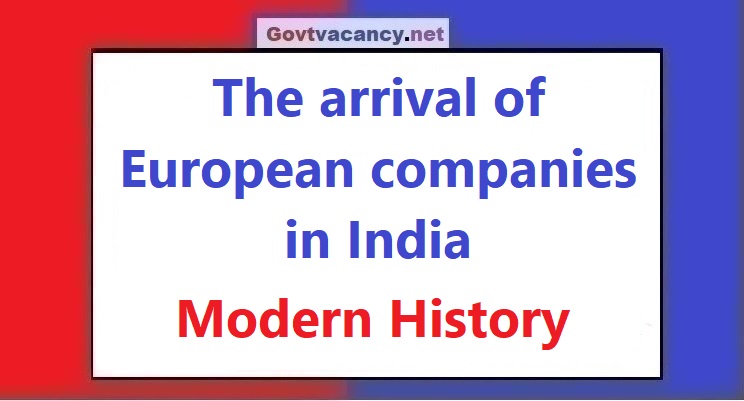 The arrival of European companies in India

The arrival of European companies in India: Since ancient times, they used to come to India for foreign trade, European companies arrived in India only for trade. First, the Portuguese came to India via the waterways, followed by the Dutch, British and French respectively. Soon the Europeans monopolized India's sea and sea areas and maritime trade.

In 1560 AD, Martin Alphonso D'Souza was sent as governor, along with the Christian saint Francisco Javier also came to India, who inspired the local castes and fishermen of Goa to convert to Christianity. The Portuguese named their maritime empire ' Istado-the-India ', under which the ships passing through their jurisdiction had to pay a security tax, which was called Cartz. It used to be like a permit. Akbar, the great ruler of the Mughal Empire, also had to pay this security tax.

The first Europeans to capture Pondicherry were the Portuguese, who took possession of Pondicherry in 1793 AD. By the 17th century, Portuguese power began to decline due to the arrival of the Dutch in India, religious intolerance and interference from the Portuguese imperial government, and the Portuguese monopoly in India ended.

The Dutch defeated the Portuguese and built Fort Williams in Kochi. The Dutch had opened trading centers in Gujarat, Coromandel, Bengal, Odisha, etc. The Dutch established the first Kothi at Musalipatam and the second at Pulicat.

Dutch trading power was at its peak in the 17th century. The Dutch exported important items like cotton, opium, silk, and spices from India. In 1759 AD, there was a battle of Bedra between the British and the Dutch, in which the Dutch were defeated so badly that their feet were uprooted from India. This was the reason that in the 18th century the power of the Dutch was weakened in front of the British.

Of all the European companies that came to India for business, the British were the most powerful. In 1599 AD, the first Englishman named John Mildenhall came to India. On December 31, 1600, Queen Elizabeth I of England granted the British Company a right to trade with India for 15 years. The charter was granted to the Levant Company by land route and to the  East India Company by sea route.

From this company, in 1608 AD, Captain Hawkins came as the ambassador of England to the court of the then Mughal ruler Jahangir. In order to increase his business in India, Hawkins requested to settle in Surat and gifted Jahangir the gloves and wagon used in England. Due to this Jahangir gave the title of ' English Khan ' to Captain Hawkins. Due to the opposition of the Portuguese and other local merchants, Jahangir could not allow the British to settle in Surat even if he wanted to. As a result, the British forcefully conquered it in 1611 AD by Captain Middleton. Or at a place called Swali, the Portuguese fleet was defeated and driven away, as a result of which, in 1613 AD, Jahangir issued a decree and ordered the British to build a permanent trading room in Surat. The first factory was established in Surat by the East India Company in 1613 AD. The first trading room was opened by the British in 1611 AD in Musalipatnam.

Francis Martin in 1673 AD. He laid the foundation of Pondicherry by acquiring a small village from the Subedar of Balikondapuram in AD. In 1774 AD, Shaista Khan, the Subedar of Bengal, ordered the construction of a Kothi in Chandranagar. 1742 AD Due to the increase of French power and the annexation of Indian states by the French Governor Dupleix, the conflict started between the French and the British, resulting in three wars between them, which is known as the Carnatic War.

All European companies had come to India for business, but gradually their craving and greed increased so much that they tried to strengthen the roots of their business by adopting all methods like price, price, and punishment. In all this, due to the policies and efficiency of the British, he ruled India for the most years.