Vedic Civilization (Based on NCERT) 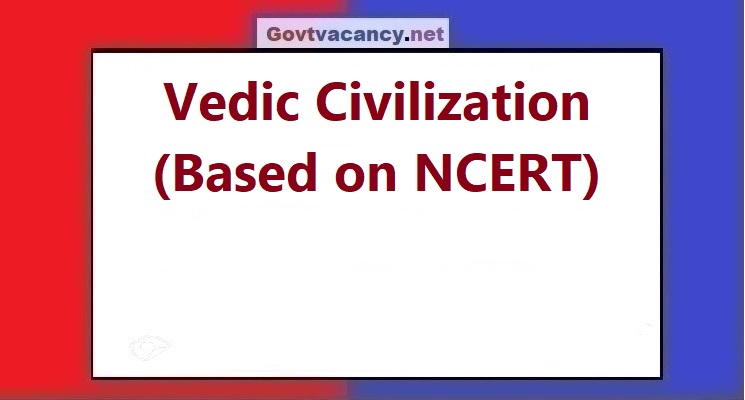 2. In the excavation, a building with 13 rooms in Bhagwanpura near Haryana and three sites in Punjab have also been found which are related to the Rigvedic period.

3. Bogazkoi inscription (Mitani inscription) 1400 BC - One inscription cites the Vedic gods Indra, Mitra, Varuna, and Nasatya as witnesses to the treaty between the Hittite king Shubbilimma and the Mitanni king Matiuaja. Here Ashwin is called Nasatya.

4. Kassi inscription (16oo BC) – This inscription gives information that a branch of Iranian Aryans came to India.

Rigveda - It has 'ten mandalas' and 1028 hymns. The first and Tenth Circle. has been added while the seventh mandala is older than the second.

The original abode of the Aryans

There are many opinions of many scholars about the residence of Aryans.According to Balgangadhar Tilak – Arctic region according to   Philip Seseti and William Jones – Europe according to P. Gilles – Hungary and Danube river according to Max Müller – Central Asia according to Fenka – Scandinavia According to Swami Dayanand – Tibet G.B. According to Rode – Bactria

The 'Raja' was the head of the nation or district of the Vedic age. Generally, it was the son of the king who attained the position of the king after the death of the father.

Since the economy of this period was a subsistence economy, there was little room for surplus. Therefore, the taxation system could not be established and the number of state officials was also limited. But the king was considered entitled to get sacrifices (taxes) from the subjects in return for fulfilling his responsibilities. It was a voluntary gift given to the king. Initially, the king did not get regular taxes from the subjects. Therefore, Indra was requested to compel the subjects to pay the royal tax. Later, the practice of regular taxes was established in the later Vedic period.

According to the thinkers, in this period, not only did he declare the supremacy of law or religion, but also insisted on its observance by the monarchy. In Rigveda, the word 'Dharma' has been used for the practice of law, later ' Dharma'.

Aryans had established their villages in the country by cleaning the forest areas. In this process, many villages in the whole of Punjab, Sandhav Pradesh, and northern India were established. The village was the smallest political and social unit in Rigvedic society. Economic, social, and political instability prevailed in the initial phase of this era. The Aryans had a joint family system.

The Aryans mainly used three metals – gold, copper, and bronze. Women used to do the work of weaving clothes. Crafts like wood cutting, metallurgy, weaving, pottery, and carpentry were prevalent.

Probably barter system would have been prevalent in that era also. Although cow, horse, and nishka were used as exchange. The Nishka was probably a gold ornament or a lump of gold. Obviously, regular coins were not developed yet. It is known from the name Ashtakanas (Ashtkarmi) that the Rigvedic aayas probably had knowledge of numbers. The person who paid interest by giving loans was called Vaknaat.

Varna's system was the main basis of the system of Rigvedic society. Under this system, every person had the freedom to choose work according to his natural qualities. Therefore, the karma of a person had a special significance, because the character of a person was determined by his karma. The duties performed according to one's virtues and deeds began to be designated in the name of Varna-Dharma in society. The word 'Varna' is derived from the Sanskrit root 'Vraj Varne' which means to choose. Thus 'Varna' refers to the selection of a particular occupation (or profession). The use of the word Varna in Rigveda is 'color' or 'light'. in the sense of. Somewhere the relation of Varna is shown with such people whose skin is black or fair. The Aryans were initially of a single Varna and the group of Aryans was called Vish.

Vedas – Vedas are the oldest texts of the Aryans. There are four Vedas – Rigveda, Samaveda, Yajurveda and Atharvaveda. Rigveda is the oldest among them all.

Upanishad -  The simple meaning of the word Upanishad is - 'Upvashan near' or 'Sit near (the disciple to sit near the Guru for the attainment of Brahma Vidya). This word is derived from the prefix 'Upa', 'Ni', and the root 'Sad'. Saddhatu has three meanings: Description - to be destroyed; Movement-getting or knowing and sedimentation-loosening. In the Upanishads, there is a very beautiful and enigmatic dialogue between the sage and the disciple, which takes the reader to the heart of the Veda. The total number of Upanishads is 108, they are divided into the following categories-

Vedanga -  Vedanga is a Hindu religious text. Education, Kalpa, Grammar, Jyotish, Chhand, and Nirukta – these are the six Vedangas.

Puranas -  Puranas are the religious texts of Hindus, in which there are accounts of creation, rhythm, ancient sages, sages, kings, etc. These are the texts of the much later Vedic period, which come in the Smriti department. The Puranas are considered very important in the form of devotional texts among the texts which have an important place in the Indian life-stream. In the eighteen Puranas, the tales of sin and virtue, dharma and adharma, karma and inaction have been told, considering different gods and goddesses as the center.