Vijayanagara Empire (Based on NCERT) 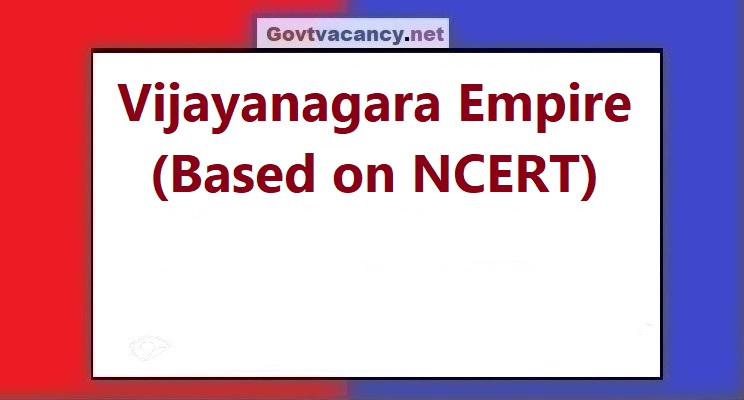 The Vijayanagara Empire (about 1350 AD to 1565 AD) was founded by King Harihara. The meaning of 'Vijayanagar' is 'City of Victory'. Since the establishment of this powerful Hindu kingdom in the Middle Ages, it was attacked continuously, but the kings of this empire gave a strong response to these attacks. This empire was never subordinate to others. Its capital was buried several times but it was rebuilt. Looking at the ruins of the temples and palaces of Hampi, it can be known how grand it must have been. It has been included in UNESCO World Heritage.

According to historians, the Vijayanagara Empire was founded by Harihara and Bukka, two members of a family of five brothers. He was a feudatory of the Kakatiyas of Warangal and later became a minister in the state of Kampili in modern Karnataka. When Muhammad Tughlaq trampled Kampili for giving shelter to a Muslim rebel, both these brothers were also taken, prisoner. They accepted Islam and Tughlaq released them to suppress the rebels there. Then a Muslim governor of Madurai had declared himself independent and the rulers of Hoysala and Warangal of Mysore were also trying to become independent. After some time Harihara and Bukka left their new masters and religion. He was purified by the efforts of his guru Vidyaran and he established his capital at Vijayanagara.

The dynasties that ruled the Vijayanagara Empire are as follows-

The 'Harihara' and 'Bukka' of the Vijayanagara Empire established the Sangam dynasty  (1336-1485 AD) in the name of their father  " Sangama".

Harihara  I (from 1336 to 1353 AD) –  Harihara I founded the Vijayanagara Empire with the help of his brother Bukkaraya. He gradually expanded the empire in 1353 AD. Harihara died in

Bukka Rai ( from 1353 to 1379 AD) –  Bukka Rai assumed the title of king as soon as he ascended the throne. His entire time was spent in conflict with the Bahmani kingdom. 1379 AD He died. He was a tolerant and generous ruler.

Harihara II ( from 1379 to 1404) -  After the death of Bukkaray, his son Harihara II ascended the throne and simultaneously assumed the title of Maharajadhiraja. It expanded the empire by conquering many regions. 1404 AD Harihara II became Kalakvalita in

Virupaksha I (1404 AD), Bukkaraya II (1404–06 AD), Devaraya I (1406–10 AD), Vijay Raya (1410–19 AD), Devaraya II (1419–44 AD), Mallikarjuna (1444) -65 AD) and Virupaksha II (1465-85 AD) were other rulers of this dynasty. During the time of Devraj II, Italian traveler Nicoloconti in 1421 AD. had come to Vijayanagara. The Arab traveler Abdul Razzaq was also there during his reign in 1443 AD. came in AD, the details of which reveal the history of the Vijayanagara kingdom. Describing the political conditions of the time of Abdul Razzaq, it is written - "If all that is said is true, the kingdom of the present dynasty has three hundred ports, each of which is equal to Calicut, the kingdom for a distance of three months 8 journeys." It is spread, and most of the people of the country do agriculture. The land is fertile, often The number of soldiers is 11 lakh." He had a long struggle with the Bahmani Sultans. Taking advantage of Virupaksha's incompetence, Narasimha Saluva established a new dynasty.

Saluva Narasimha was the founder of the Saluva dynasty . In 1485 AD, Virupaksha II of the Sangam dynasty was murdered by his son, and at this time there was an atmosphere of unrest and chaos in the Vijayanagara Empire. Narsa Nayak, the commander of Narasimha, took advantage of all these circumstances. He captured the Vijayanagara Empire and invited Saluva Narasimha to sit on the throne.

The details of the kings of Saluva dynasty are as follows-

The Tuluva dynasty (1505-1570 AD) was founded by 'Veer Narasimha', the son of Narsa Nayak. In history, it has been called the 'Second Balpahar'. In 1505, Narasimha himself captured the throne of the Vijayanagara Empire by killing the Saluva king, Immadi Narasimha, and founded the Tuluva dynasty.

The entire reign of Narasimha was affected by internal rebellions and invasions. Veer Narasimha died in 1509 AD. Although his reign was short, still he organized the army well. He inspired his citizens to be war-loving and strong. Veer Narasimha made an agreement with the Portuguese governor Almeida to buy all the horses brought by him. He started a liberal policy by removing the marriage tax from his kingdom. Veera Narasimha is described by Nunij as a 'religious king' who used to donate to holy places. After the death of Veer Narasimha, his cousin Krishnadev Raya' ascended the throne.

The Aravidu dynasty or 'Karnat dynasty' (1570-1652 AD) was established in Penugonda by Tirumal and overthrown by Sadashiva Raya around 1570 AD. This dynasty was the fourth and last dynasty of the Vijayanagara Empire of South India. Penugonda was the capital of this dynasty.

The Aravidu dynasty inherited the disastrous defeat of Vijayanagara at the Battle of Talikot or 'Raksha Tangadi' in 1565 by the combined armies of Bijapur, Ahmednagar, and Golconda. Rang II was the successor of Tirumal of this dynasty. Rang II was followed by Venkata II. He made Chandragiri his headquarters. This was the last link in the chain of great rulers of the Vijayanagara Empire. Venkata II made direct correspondence with Philip III of Spain and invited Christian priests from there. It was during his reign that Wadiyar established the Kingdom of Mysore in 1612 AD. Venkata II was particularly interested in painting.

The details of the kings of Aravidu dynasty are as follows-

Reasons for the fall of Vijayanagara Empire